The symptoms of BPPV include dizziness or vertigo, lightheadedness, imbalance, and nausea. Activities which bring on symptoms will vary among persons, but symptoms are almost always precipitated by a change of position of the head with respect to gravity. Getting out of bed or rolling over in bed are common “problem” motions . Because people with BPPV often feel dizzy and unsteady when they tip their heads back to look up, sometimes BPPV is called “top shelf vertigo.” Women with BPPV may find that the use of shampoo bowls in beauty parlors brings on symptoms. An intermittent pattern is common. BPPV may be present for a few weeks, then stop, then come back again.

The most common cause of BPPV in people under age 50 is head injury . There is also an association with migraine (Ishiyama et al, 2000). In older people, the most common cause is degeneration of the vestibular system of the inner ear. BPPV becomes much more common with advancing age (Froeling et al, 1991). In half of all cases, BPPV is called “idiopathic,” which means it occurs for no known reason.

Certain modifications in your daily activities may be necessary to cope with your dizziness. Use two or more pillows at night. Avoid sleeping on the “bad” side. In the morning, get up slowly and sit on the edge of the bed for a minute. Avoid bending down to pick up things, and extending the head, such as to get something out of a cabinet. Be careful when at the dentist’s office, the beauty parlor when lying back having ones hair washed, when participating in sports activities and when you are lying flat on your back.

Office treatment of BPPV: The Epley

Instructions for patients after office treatments

1. Wait for 10 minutes after the maneuver is performed before going home. This is to avoid “quick spins,” or brief bursts of vertigo as debris repositions itself immediately after the maneuver. Don’t drive yourself home.

2. Sleep semi-recumbent for the next two nights. This means sleep with your head halfway between being flat and upright (a 45 degree angle). This is most easily done by using a recliner chair or by using pillows arranged on a couch. During the day, try to keep your head vertical. You must not go to the hairdresser or dentist. No exercise which requires head movement. When men shave under their chins, they should bend their bodies forward in order to keep their head vertical. If eyedrops are required, try to put them in without tilting the head back. Shampoo only under the shower.

3. For at least one week, avoid provoking head positions that might bring BPPV on again.

Be careful to avoid head-extended position, in which you are lying on your back, especially with your head turned towards the affected side. This means be cautious at the beauty parlor, dentist’s office, and while undergoing minor surgery. Try to stay as upright as possible. Exercises for low-back pain should be stopped for a week. No “sit-ups” should be done for at least one week and no “crawl” swimming. (Breast stroke is OK.) Also avoid far head-forward positions such as might occur in certain exercises (i.e. touching the toes).

What if the maneuvers don’t work?

These maneuvers are effective in about 80% of patients with BPPV (Herdman et al, 1993). If you are among the other 20 percent, your doctor may wish you to proceed with the Brandt-Daroff exercises, as described below. If a maneuver works but symptoms recur or the response is only partial (about 40% of the time according to Smouha, 1997), another trial of the maneuver might be advised.

The Brandt-Daroff Exercises are a method of treating BPPV, usually used when the office treatment fails. They succeed in 95% of cases but are more arduous than the office treatments. These exercises are performed in three sets per day for two weeks. In each set, one performs the maneuver as shown five times. 1 repetition = maneuver done to each side in turn (takes 2 minutes)

Start sitting upright (position 1). Then move into the side-lying position (position 2), with the head angled upward about halfway. An easy way to remember this is to imagine someone standing about 6 feet in front of you, and just keep looking at their head at all times. Stay in the side-lying position for 30 seconds, or until the dizziness subsides if this is longer, then go back to the sitting position (position 3). Stay there for 30 seconds, and then go to the opposite side (position 4) and follow the same routine. 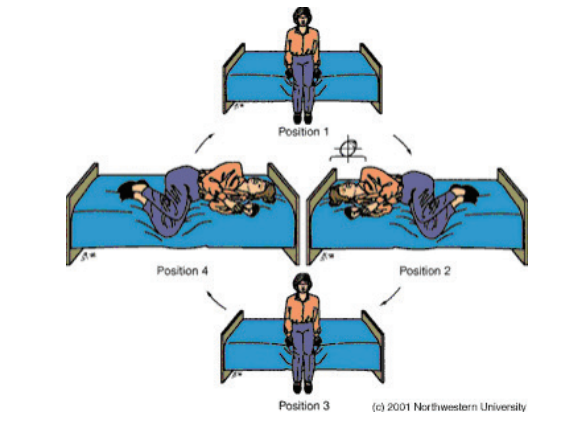 These exercises should be performed for two weeks, three times per day, or for three weeks, twice per day. This adds up to 52 sets in total