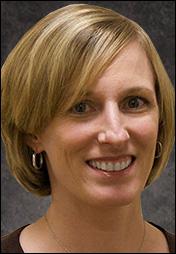 Dr. Erin McGintee is a native of East Hampton.  She obtained her medical degree at the State University of New York at Stony Brook, where she was a member of the AOA Medical Honor Society.  She received her pediatric training at the Children's Hospital of Philadelphia, which is consistently ranked the number one children’s hospital in America by US News and World Report.  Following residency, Dr. McGintee further pursued subspecialty training during a three-year fellowship in allergy and immunology at the Children’s Hospital of Philadelphia, with adult cross training at the Hospital of the University of Pennsylvania.  She is board certified in both pediatrics and allergy and immunology.

Following the completion of her training, Dr. McGintee remained at the Children's Hospital of Philadelphia as an attending physician in the Division of Allergy and Immunology from July 2006 until June 2009.  She has now chosen to return home to the Hamptons to join Peconic ENT and Facial Plastic Surgery.  Dr. McGintee practices both adult and pediatric allergy and clinical immunology, with specific interests including asthma, atopic dermatitis, food allergy, and allergic rhinoconjunctivitis/sinusitis.

Southampton Hospital's Tick-Borne Disease Resource Center hosted a lecture by Erin McGintee, MD of ENT & Allergy Associates to learn about the α-gal allergy, which can cause patients, bitten by a Lone Star Tick, to develop an allergic reaction to red meat.

American Board of Pediatrics, 2003

American Board of Allergy and Immunology, 2006

Residency:  The Children's Hospital of Philadelphia

Fellowship:  The Children's Hospital of Philadelphia