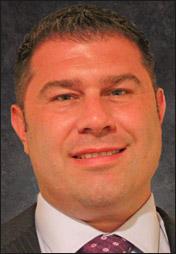 Vito Brunetti, MD, FACS, graduated from Cornell  University, where he was awarded a Columbus Citizen’s Foundation scholarship, earned his Medical Degree from SUNY Buffalo (NY) receiving the Haber Award for superior academic credentials. He completed an internship in general surgery at Beth  Israel  Medical  Center in NYC and his residency training in Otorhinolaryngology—Head and Neck Surgery at Albert Einstein College of Medicine, where he served as Administrative Chief Resident. Prior to joining ENTA, Dr. Brunetti served patients at Maimonides  Medical  Center in Brooklyn as well as in private practice, most recently in Staten Island, NY.

Dr. Brunetti has given a number of very well received presentations and lectures in many areas of ENT, and has also conducted research in Hoarseness in Children and Occult Nodal Disease. He is board-certified in Otolaryngology and a Fellow of the American College of Surgeons and a member of the American  Academy of Otolaryngology—Head and Neck Surgery (AAO-HNS). In addition to these outstanding credentials, Dr. Brunetti is also fluent in Italian and proficient in Spanish.