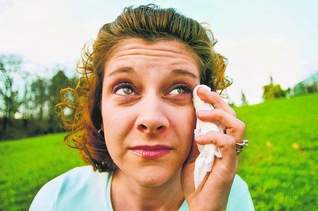 He used to be that kid on the field each spring with the runny nose, watery eyes and a tissue shoved up the sleeve of his baseball uniform.

So when patients march into his office in April and May with the same complaints about seasonal allergies, Dr. Prashant Ponda empathizes more than they know.

"I know exactly how they feel. You wake up in the morning and can't predict what the day is going to be like because it all depends on the pollen count and how much you have to be outside'', said Ponda, an allergist and immunologist with ENT and Allergy Associates, which has 32 regional locations, including Newburgh and Fishkill.

"You can't sleep well at night. You feel miserable during the day. It's horrible'' he said.

Pollen, which can travel for miles, is the spring culprit for allergy sufferers. It is tiny grains released into the air by tree, grasses and weeds for fertilizing other plants. When people who are allergic breathe in the grains, their immune systems go into overdrive.

Antibodies attack allergens, causing the release of histamines into the blood. This triggers symptoms such as runny noses and itchy eyes.

There's plenty of that going around right now because the picturesque Hudson Valley isn't nicknamed "Sinus Valley'' for nothing. The wooded hillsides come with a price, according to the Allergy and Asthma Foundation of America, a national patient advocacy, education and research group.

Poughkeepsie, New York City and Albany are on the foundation's seasonal lists of the top 100 most challenging places to live in the United States for allergy sufferers.

The foundation releases one list every fall and one in the spring. The 2010 ratings will be out soon, but chances are the Hudson Valley's not going to drop off any time soon. Last spring, New York City was No. 30, Albany was 42 and Poughkeepsie was 48, foundation spokeswoman Angel Waldron said. At the top of the list? Louisville, Ky.

Waldron added that overall, about 60 million Americans suffer from allergies and asthma. The foundation's rating system is based on the pollen count, number of allergists practicing in and near a city and the amount of allergy medication being used by the population.

Waldron said fall allergies are actually more prevalent in this part of the country because of ragweed.

"We've got cities all over the country, but the northeast usually dominates the top of the list in the fall because of ragweed. In the spring, the southeastern cities are at the top'' she said.

That doesn't do much to ease the discomfort of northeasterners who suffer when tree pollen is in abundance in spring, discomfort that may be greater year because of a wet winter, Ponda said.

In New Paltz, on the campus of the State University of New York, the head count at the student health center goes up this time of year as students file in for help controlling their allergy symptoms, center Director Dr. Peter Haughton said.

"They have itchy eyes, runny noses", Haughton said. "They're miserable, but they don't feel ill.''

They show up thinking they have something else wrong with them.

"Sometimes it's even hard for the physician to figure out what we're dealing with. It is a viral illness or is it allergies? It may take more than one visit to figure it out'' Haughton said.

Often, it turns out, the allergy sufferer has a family history of allergies, they are already allergic to animals, or had some allergic reaction after the grass was cut back home.

But pollen many times gives them a much more severe reaction and they don't realize their symptoms are because of allergies, Haughton said.

Most students use Claritin or other over-the-counter medications, plus nasal spray, with a small percentage of them needing allergy shots. Haughton said the health center used to provide shots, but no longer does and students must see allergists at home or in the local community.

After suffering for years and using over-the-counter medicines, Ponda said he finally began getting allergy shots several years ago after he settled in the Hudson Valley and wasn't moving around as he had been during years of schooling.

Allergy shots work the same as a vaccine. They force the immune system to go to work on the offending allergen. But unlike a vaccine, allergy shots must be given over a three- to five-year period, though patients will feel better within the first six to nine months, Ponda said.

The initial shots are "blasting it out of your system'' he said, with the follow-ups considered maintenance until tests show the allergies have greatly decreased.

Here are some ways to tell if shots are needed, he said, for both children and adults: If daily medications must be used to control allergies or allergic asthma, if hearing or speech is affected because of congestion and if working or school days are lost because of allergies.

He said every case is different, and there should be extra caution taken when medicating or giving allergy shots to children. However, he added, there is research showing allergy shots help prevent the onset of asthma later on.

Ponda said besides nasal sprays, over-the-counter medications and some prescription drugs, there are other things families can do when somebody suffers from allergies. The main thing is minimizing exposure to pollen by closing windows and using air conditioners and air purifiers.

After being outside for a long period, take a bath or shower and wash your clothes so pollen isn't being carried around and brought into beds. All of these things, he said, are easier for adults to do than children, especially on a beautiful spring day when they want to be outside.

While runny noses may seem like the norm in spring in the Hudson Valley, Ponda said it doesn't necessarily have to be that way.

"I encourage people to seek help. See your primary care physician or make an appointment with an allergist. There's no reason to be suffering through this'' he said.