9 Foods That May Help Ease Your Allergies

9 Foods That May Help Ease Your Allergies

Seasonal allergies can be a nightmare, but some foods, including fish and vitamin C-rich veggies, may help relieve allergy symptoms.

When the spring season starts, so does allergy season. The itchy eyes, runny nose, and dry coughs are irritating reminders you should stock up on your allergy medicine. But, perhaps closely monitoring your diet, specifically, the foods you eat, could alleviate some common allergy symptoms.

Allergies happen because the body's immune system overreacts to harmless substances, treating them like potential threats when they really aren't, according to the American Academy of Allergy, Asthma & Immunology. "When the body encounters an allergen—such as pollen, dust, or animal dander—a chemical cascade occurs that leads to activation of specific cells in the body, called mast cells, that release additional chemicals, including histamine," says Stacey Galowitz, an allergist/immunologist at ENT & Allergy Associates in Somerset, New Jersey. "These chemicals cause the unpleasant inflammatory symptoms of allergy: Swelling of the nasal passages, eyes, and throat."

Treatment options for common allergies vary from antihistamines to avoiding the allergen altogether. And while there are foods that can cause allergic reactions (peanut, shellfish, dairy), there are certain foods that may also ease allergies caused by pollen and other environmental triggers.

To improve allergies, you can consume nutrients that help your body stabilize mast cells, says Robin Foroutan, RDN, an integrative medicine dietitian and spokesperson for the Academy of Nutrition and Dietetics. "A great strategy is to help yourself to some healthy doses of these antihistamine foods," says Foroutan. "With severe seasonal allergies, I typically recommend supplementing with these nutrients about three weeks leading up to allergy season." Dr. Galowitz agrees that a variety of foods may help allergies due to their calming anti-inflammatory and antihistamine properties.

As with many natural remedies, robust scientific evidence for these foods' effectiveness against allergy symptoms is often lacking. But, it generally isn't harmful to try them—in fact, most of them are foods that are good for you in general, and make a healthy addition to your diet. That said, before starting any new eating plan, you should talk to your doctor about your individual nutritional needs.

"These foods aren't meant to replace any medical treatment for seasonal allergies, but they can be added to one's diet to help reduce inflammation and allergic response," Dr. Galowitz says. "Consultation with a board-certified allergist can help you know what you are allergic to and what seasons may cause trouble."

To help alleviate allergy symptoms, we spoke with health experts who explained how certain foods may help. 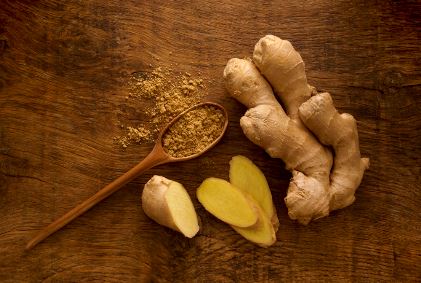 Ginger and its extracts are known for their medicinal effects including anti-nausea, pain relief, and anti-inflammation, says Dr. Galowitz. Because of its anti-inflammatory properties, it may work against allergies as well. "A 2016 animal study showed ginger suppressed production of certain cytokines that cause mast cell activation, thereby leading to prevention and alleviation of allergic rhinitis symptoms," she says. (Cytokines are immune cell-signaling molecules.) Unfortunately, there aren't human studies yet that prove ginger's effects on allergies; however, it's a spice you probably already have in your cupboard so it's relatively easy to add more of it to your diet. "There doesn't seem to be any difference in fresh ginger's anti-inflammatory ability versus dried," Dr. Galowitz says. (You'll may want to avoid these 7 foods that can make allergies worse.) 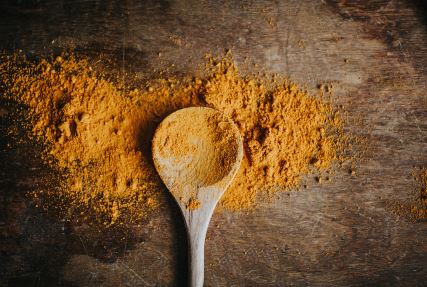 Turmeric is another spice gaining attention for its ability to reduce inflammation. "The active component of turmeric is curcumin, which has anti-inflammatory properties, and its anti-allergic properties are due to inhibition of histamine release from mast cells," Dr. Galowitz says. "Animal studies have demonstrated marked inhibition of an allergic response in mice treated with curcumin." A 2016 study published in Annals of Allergy, Asthma & Immunology, this time in humans, showed an improvement in nasal airflow and a positive effect on immune response in patients with allergic rhinitis who took curcumin. Turmeric can be taken in pills, teas, or used in cooking, where it provides a vibrant yellow color. "It is also recommended to pair turmeric with black pepper, as the pepper can increase the bioavailability of curcumin by up to 2,000 percent," Dr. Galowitz says. 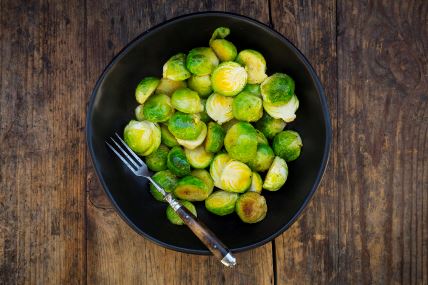 It's not a bad idea to load up on citrus fruits. "Vitamin C has been shown to act as a natural antihistamine by directly inhibiting the inflammatory cells that release histamine," Dr. Galowitz says. "Additionally, it can help break down histamine that has already been released, providing allergy symptom relief. Vitamin C is also an antioxidant, which means it counteracts the inflammatory allergic response." She recommends bell peppers, Brussels sprouts, and broccoli, which all contain more vitamin C than oranges; other good options include cauliflower, cabbage, and kale. Foroutan says vitamin C helps stabilize mast cells, and also recommends fruits including strawberry, kiwi, papaya, mango, and rose hips. 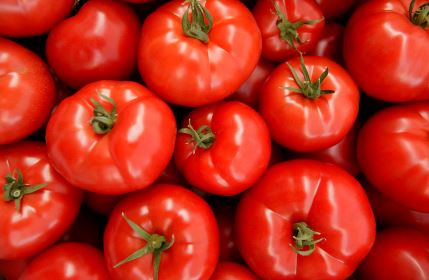 Technically a fruit, tomatoes are also high in vitamin C. Plus, they contain other potential allergy fighters as well. "Tomatoes additionally contain lycopene, another antioxidant compound that helps decrease inflammation," Dr. Galowitz says. Although lycopene is also found in other red and pink foods like watermelon and pink grapefruit, 85 percent of dietary lycopene comes from tomato products including ketchup, tomato juice, and sauce. Research on lycopene's connection to allergies is still emerging, but the US National Library of Medicine notes it may improve lung function after exercise in people with asthma. 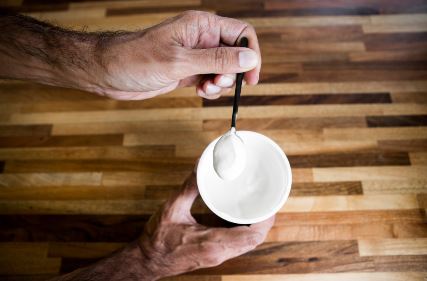 Your gut and its collection of microorganisms actually plays a big role in regulating your immune system. "Probiotics are beneficial bacteria that live in your gut that can provide both anti-inflammatory and anti-allergic effects," Dr. Galowitz says. Foods such as yogurt with live active cultures, kefir, sauerkraut, and kimchi are all good sources of probiotics. "An Italian study found that young children aged 2 to 5 with allergic rhinitis who drank fermented milk containing the probiotic Lactobacillus casei for 12 months, experienced fewer allergic episodes than children who drank a placebo," according to Dr. Galowitz. More recent reviews of research, specifically a 2019 study in the journal Children, suggest probiotics have the potential for quelling allergies, but the specific strains and mechanisms for how they work are still being determined. One 2017 study in The American Journal of Clinical Nutrition found a certain combination of Lactobacilli and Bifidobacteria reduced hay fever symptoms during spring allergy season. 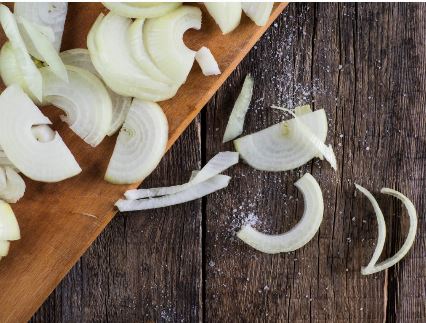 Here's another of the surprising ways you may be able to put a damper on seasonal allergies. "Foods such as onions, cabbage, peppers, berries, and apples all contain quercetin, which is a natural plant compound that gives some of these foods their reddish hue," Dr. Galowitz says. Again, human studies are few, but animal research published in 2013 in the journal International Immunopharmacology has shown treatment with quercetin reduced nasal allergy symptoms. "Quercetin acts like a natural antihistamine by stabilizing mast cells, which can decrease histamine, and therefore, the symptoms of allergies, according to a 2016 study in Molecules," Dr. Galowitz says. "Cooking reduces the quercetin content, so best to eat raw, in salads, on sandwiches, or in dips." Foroutan also recommends other quercetin-packed foods such as grapes, citrus fruit, broccoli, asparagus, and green tea. 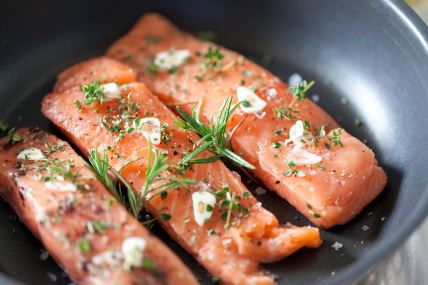 This could be one of the new solutions for allergies you haven't heard of yet. "Fatty fish, such as salmon, sardines, and mackerel, can fight allergic inflammation through omega-3 fatty acids," Dr. Galowitz says. "These fats help stabilize cell membranes, making them less likely to release histamine when an allergen arises." She points to a 2007 Japanese study published in the Journal of the American College of Nutrition that found women who ate more fish had lower levels of hay fever. "The recommendation would be two servings of fish a week," Dr. Galowitz suggests. "Other foods rich in inflammation-fighting omega-3s include walnuts and flaxseeds." 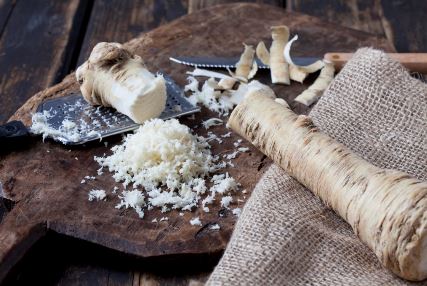 Have you ever eaten a big dollop of wasabi and experienced instant nose-running and watery eyes? In this case, such effects can be beneficial for clearing out your sinuses. "Spicy foods, such as anise, fennel, horseradish, and hot mustard, can all act as natural decongestants," Dr. Galowitz says. "They offer allergy relief by stimulating the mucosal cilia to help break up congestion." (Cilia are the hair-like structures that move mucus.) In addition, a component of hot peppers called capsaicin may offer similar nasal-clearing benefits. Plenty of people have anecdotally experienced this sensation when eating spicy foods. However, not much recent scientific research has been done to back it up. 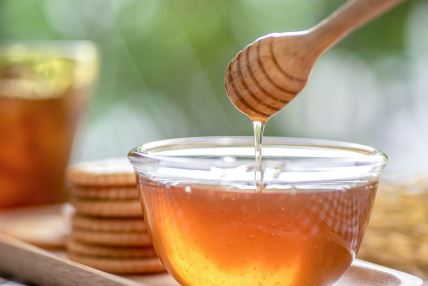 "Local bee honey and pollen is a 'buzzy' natural way people combat seasonal allergies," Foroutan says. "The idea here is similar to allergy shots: Small doses of the allergic trigger, in this case, local pollen, can help the body realize that the trigger isn't an actual threat." Anecdotally, it seems to work for some people, but there are no hard data at this time, she says. The National Center for Complementary and Integrative Health says there's no convincing evidence that honey relieves season allergies—still, you can try it and see. With bee pollen, "it's best to try a little bit first to make sure you're not allergic to it, and keep pollen in the freezer, since it's possible for it to get moldy," Foroutan says. Use extra caution if you're allergic to bee stings and consult with your doctor first.