What is Swimmer’s Ear?

Swimmer’s ear can happen at any time of the year but tends to peak in the summer months as people spend more time in the water.  Lingering moisture in the ear canal after swimming can create an environment in which bacteria love to grow.  Swimming can also wash away healthy ear wax that protects the ear canal from infections. Swimmer’s ear infections can happen at any age but tend to happen in older children, and usually do not produce a high fever.  There is also no association between upper respiratory tract infections and swimmer’s ear.

Most acute otitis externa is caused by a bacterial infection but there are some instances where the infection may be fungal.

How is swimmer’s ear different than a ‘regular’ ear infection?

When patients and parents think of an ear infection, they are often speaking of a middle ear infection (acute otitis media or AOM).   This differs from swimmer’s ear in that the ear canal is not infected, rather there is an infection behind the eardrum. AOM is often treated with antibiotics by mouth unless the child has ear tubes where antibiotic ear drops are recommended instead.  AOM is more common in very young children, and is often associated with an upper-respiratory-tract infection.  A middle ear infection is not caused by bath water or pool water getting into the ears because the eardrum keeps the water from getting inside the body. 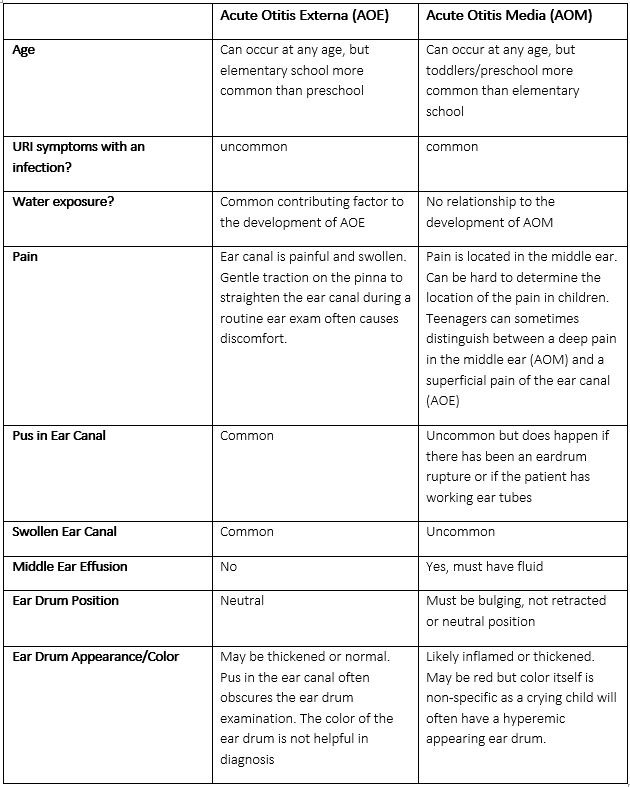 How is Swimmer’s Ear Treated?

Swimmer’s ear should be treated with ear drops alone. In fact, the ear drops often help faster and do a much better job at treating the infection than antibiotics taken by mouth. Acidifying ear drops, such as acetic acid, or antibiotic ear drops with or without a steroid can be considered (see Table 2). 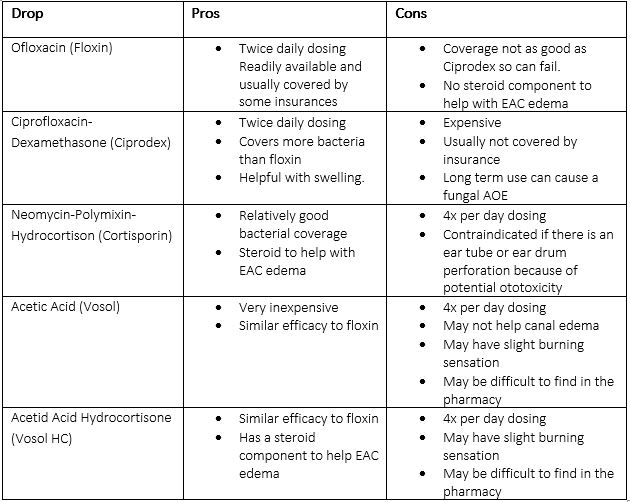 I always instruct families that the pharmacy requires a number of drops to be put on the bottle, but meticulously counting out the number is not important because every ear canal is a different shape and will take a different volume of drops.  Have the parent try to straighten the ear canal by gently pulling the external ear up and back then put the drops in the ear canal until they see the drops pooling.  Push them in the ear canal by gently pumping on the tragus, ensuring they are distributed as deeply inside as possible.  If the child will lie with that ear up for a few minutes, that will also help them penetrate the infection.

Can Swimmer’s Ear Be Prevented?

If a child suffers from frequent swimmer’s ear, consider having the child use ear plugs to limit the amount of water that gets into the ear canal.  A hairdryer on a low cool setting after swimming can also help dry up excess water and reduce the frequency of swimmer’s ear infections.  The over-the-counter alcohol based drying drops or acetic acid drops may also be a good option for children with an intact ear drum without ear tubes.

There are some special circumstances that warrant ENT referral.  Any child who fails to improve with topical treatment after 48 hours should be referred to ENT for evaluation.  Most of these will still be able to be treated topically but may require clearance of debris, an ear wick to aid drop delivery, or a change in the type of ear drop prescribed.

Immunocompromised Individuals: Although rare in children