Surgery to remove the thyroid gland, called thyroidectomy, is a common procedure used to treat a variety of both benign and malignant disorders of the thyroid gland. It is an operation done though a horizontal incision in the neck, in an operating room, while a patient is under anesthesia. There are essentially only two operations that are done on the thyroid gland; hemithyroidectomy, meaning removing one side of the gland, or total thyroidectomy where the entire gland is removed. Patients often, understandably, ask why the nodule cannot be removed without removing part or all of the gland. The reason is that it is usually impossible to safely carve the nodule out from the surrounding glandular tissue. It also can be difficult to find nodules that may be buried deep within the gland, or to be sure which is the suspicious nodule in a gland with multiple nodules. 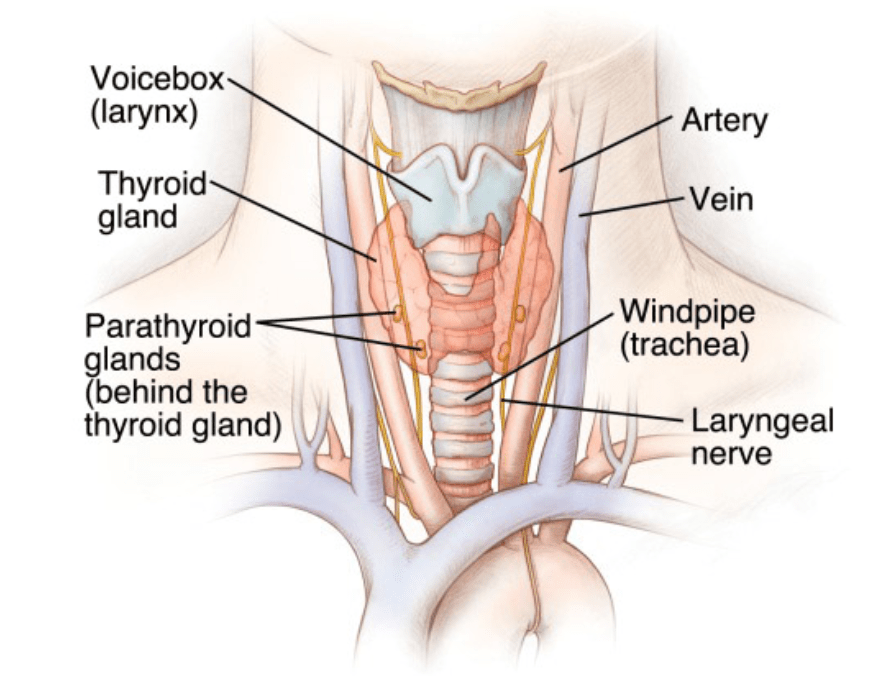 The recurrent laryngeal nerve sends impulses to the vocal cords to allow them to move. The vocal cords are located in the larynx, or voice box, directly on top of the trachea, or windpipe. The thyroid gland sits over and in front of the trachea, just below the voice box. The recurrent laryngeal nerve courses right alongside the trachea and up into the voice box. The thyroid gland rests directly on top of the nerve as it enters the larynx. The nerve has to be identified and carefully preserved and protected as the gland is removed. Injury to the nerve will result in difficulty moving the vocal cord on that side. This can result in a hoarse breathy voice and difficulty swallowing. Permanent injury to the nerve resulting in paralysis of the vocal cord is extremely rare. This occurs is significantly less than 1% of thyroid surgeries. However, due to manipulation and irritation of the nerve, there can be some degree of temporary weakness of nerve function in approximately 5% of cases. This means there may be some temporary weakness of the vocal cord, that will return to normal in a few weeks. A great deal of attention is placed on identifying and protecting the nerve during surgery. Magnifying glasses are used, and an electrical nerve monitor is used to help detect nerve irritation before it progresses to injury.

After a patient has their entire thyroid gland removed, they will need to take thyroid hormone replacement for the rest of their lives. The thyroid gland produces thyroid hormone, which is involved in controlling the body’s metabolism, and is necessary for life. If a patient did not take their thyroid medication, a variety of problems would develop, but only after a number of weeks or months. Nothing happens if one or two doses are missed. Seventy five percent of patients who have half of their gland removed will not need to take thyroid replacement medication, assuming that their levels were normal before surgery. We check the blood tests for thyroid function 4-6 weeks after hemithyroidectomy. It takes a few weeks for the body to equilibrate and to then see if medication will be required.