Tumors of the Parotid Salivary Gland

Tumors of the Parotid Salivary Gland

The parotid is a large salivary gland that sits in the cheek, in front of and below the ear. Tumors, which can be either benign or malignant, may occur within the gland. It is much more common for a tumor within the parotid gland to be benign. Cancers of the parotid gland are relatively rare. These parotid tumors may be noticed by patients themselves, or they may be detected as part of a routine physical exam by a doctor. Most often there will be no symptoms associated with the tumor, other than a noticeable lump in the cheek or neck. There will be no alteration is salivary production. The first steps in evaluating a mass in the parotid gland are imaging and tissue sampling. Imaging will usually involve a CT or MRI scan, although sometimes ultrasound can suffice. Tissue sampling is extremely important and done by fine needle aspiration biopsy, or FNA. This is typically done by a radiologist, using an ultrasound machine to guide the needle into the center of the tumor. This is a simple procedure done with some local numbing medication. A pathologist will examine the tissue sample and can usually determine the nature of the tumor. 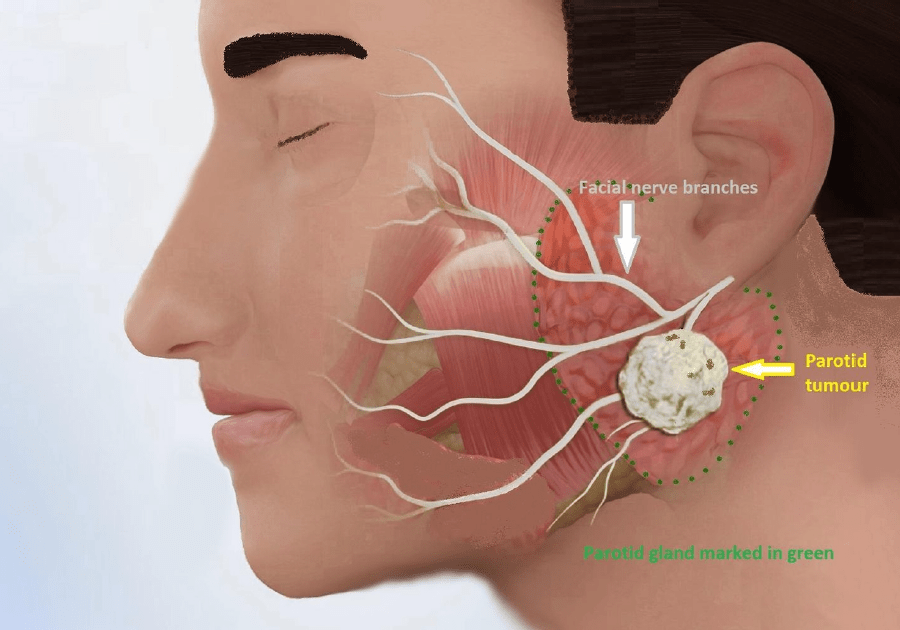 The most common benign tumor of the parotid gland is called a pleomorphic adenoma. Although it is benign, there is an approximately 5% chance of conversion to a cancer over many years. For this reason, it is generally recommended that a pleomorphic adenoma be removed, especially in younger patients. A warthin’s tumor is the next most common benign growth in the parotid and it is especially common in smokers. In fact, smokers may develop multiple warthin’s tumors, sometimes on both sides. Warthin’s tumors are completely benign, with no malignant potential, and therefore can be left alone if they are not bothering the patient. They may become bothersome by growing in size or becoming recurrently infected. Malignant tumors may also occur in the parotid gland, however, as stated before, they are relatively uncommon. Examples of malignant parotid tumors include mucoepidermoid carcinoma, squamous cell carcinoma, acinic cell carcinoma, adenoid cystic carcinoma and lymphoma.

The treatment for most tumors in the parotid gland is surgical removal. This operation is called a parotidectomy. Parotidectomy is an operation performed through an incision on the neck, in the operating room, with the patient under anesthesia. There is a large nerve called the facial nerve that runs from behind the ear, through the middle of the gland, and branches to reach the various muscles of the face. The nerve divides the gland into two parts, the superficial lobe and the deep lobe. Surgery may involve one or both lobes of the gland.

The facial nerve allows the muscles of the face to move, for example when we smile. Injury to the facial nerve during parotid surgery resulting in paralysis of the face is rare but is the main risk of surgery on the parotid gland. Because the nerve needs to be identified and carefully preserved and protected, the surgery takes longer, and the incision is larger than patients expect. The incision is similar to what is used for a face lift. It will start in front of the ear and extend down behind the jaw. Parotidectomy may take two to three hours, and patients are typically able to go home the day of surgery. Temporary weakness of one or more of the nerve branches is not uncommon. It can result from manipulation or irritation of the nerve during the surgery. If this occurs it will usually resolve over a few weeks. True permanent nerve injury resulting in facial paralysis is extremely rare.

After parotid surgery there will be numbness over the skin around the incision. This is expected. The area that is numb will slowly shrink over the first few weeks after surgery, however there is often some permanent numbness of the ear lobe. This is usually not bothersome to patients. After parotid surgery patients sometimes experience increased sweating of the skin over the gland, especially when eating. This is called Frey’s syndrome. It occurs because the nerves that signal the parotid to produce saliva sometimes grow into the skin. This too is rarely bothersome to patients and can often be managed simply by applying antiperspirant to the area. A drain is usually left in place after parotid surgery. This is to removed fluid from the space where the tumor used to be. The drain is typically left in place for two days and then removed in the office. It is possible for fluid to accumulate under the skin even after the drain is removed, and it may then need to be aspirated with a needle in the office.

Parotid cancers may require more extensive surgery than that required for benign tumors. Removal of the entire gland is often necessary, as well as the surrounding lymph nodes of the neck. Surgery to remove the lymph nodes of the neck is called neck dissection and, if necessary, will be performed at the same time as the parotidectomy. In certain circumstances post-operative radiation may be used as well.