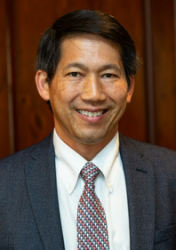 He completed two years of surgery residency at Yale New Haven Hospital, and completed his residency in Otolaryngology-Head and Neck Surgery at the University of Southern California in Los Angeles, including Pediatric training at Children’s Hospital of Los Angeles and Otology training with the House Ear Clinic.

He specializes in General Adult and Pediatric otolaryngology, nasal and sinus surgery, with expertise in endoscopic sinus surgery, using the latest technologies including image guidance and balloon dilation of sinuses.