If there is a deviated septum causing nasal obstruction, the only fix for this is surgery (“septoplasty”). Oral medications and nasal sprays can help treat any nasal swelling and congestion but they have no effect on the underlying septal position. Typically, septoplasty is performed once the patient’s nasal bones and cartilages are fully done growing (typically mid to late teens). 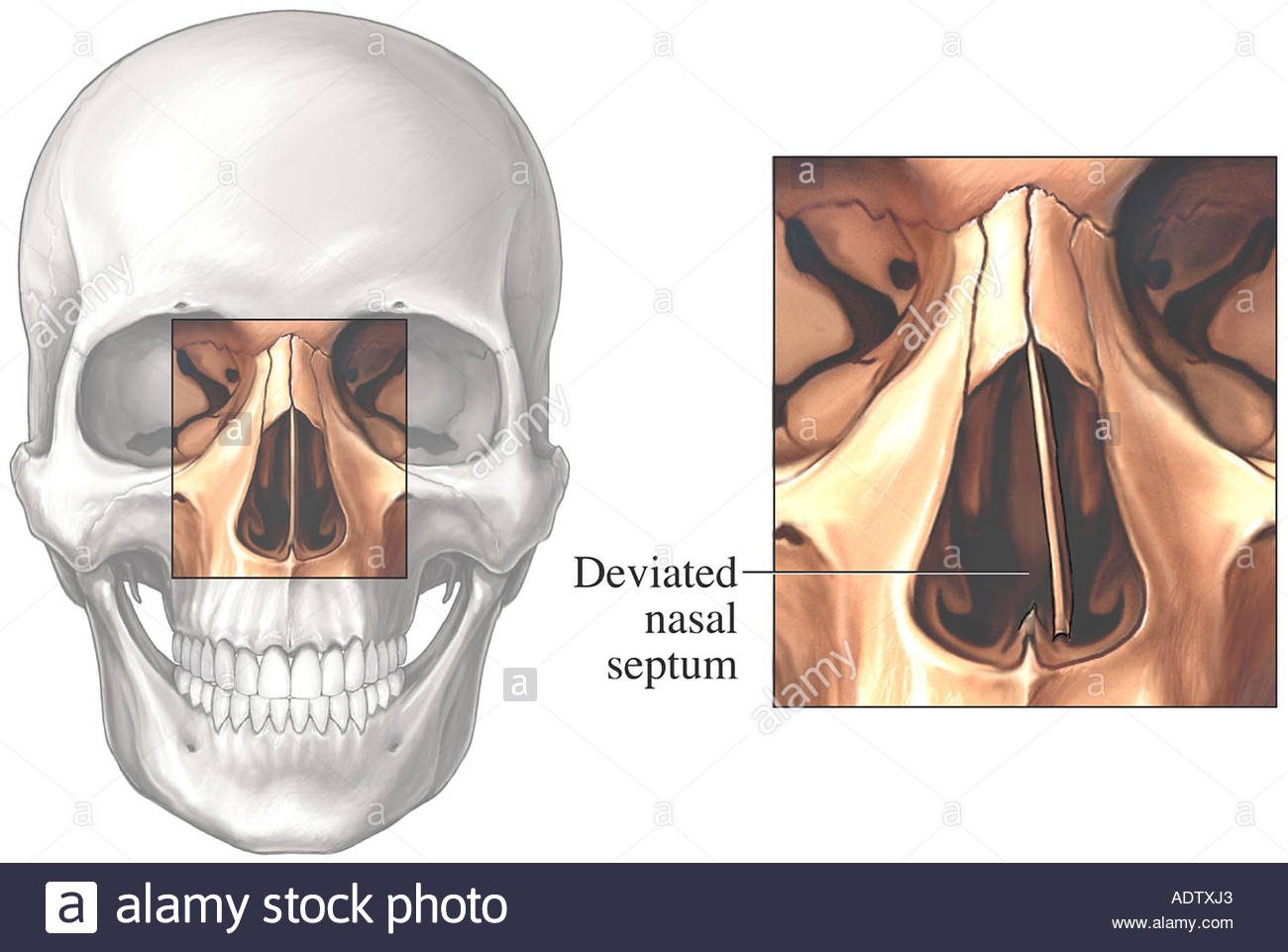 It is approximately 3 inches deep x 1.5 inches high and is made up of cartilage in the front part and bone in the back part. Ideally, it is positioned in the midline separating the nose up into 2 equal corridors.  However, the septum can be deviated to one side or sometimes to both sides (“S-shaped”) causing narrowing of the nasal airway and difficulty breathing through the nose. (SEE PHOTO BELOW)

The septum can be deviated in the very front part (“caudal septum”), mid portion, or the back of the septum. Below, you can see a CAT Scan showing a posterior bony septal deviation (“bony spur”) outlined by the blue line whereas the red line is where a straight septum should be. 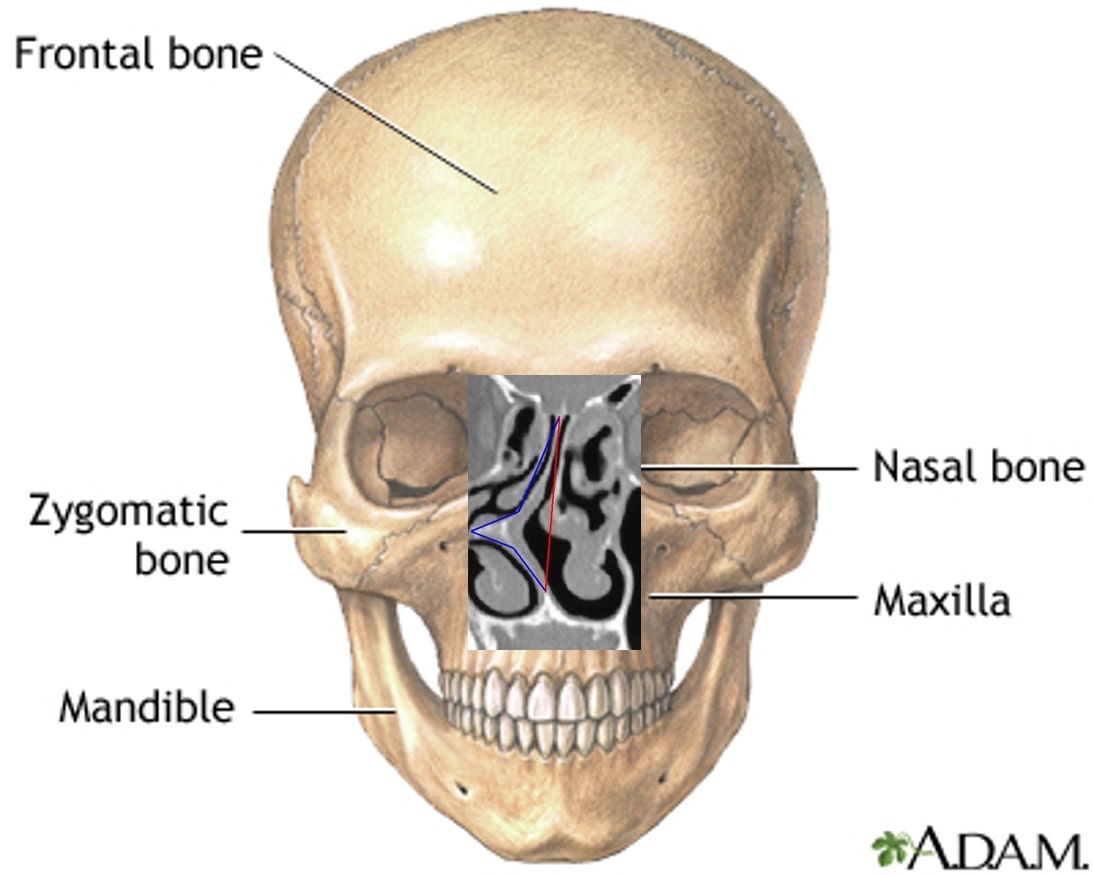 It is important to identify where the septum is deviated as deviations in the front (“caudal”) or top (“dorsal”) typically require a more complex procedure to straighten.  Some septal deviations can be visualized by just looking inside the nostrils though others require nasal endoscopy (a camera used in the office to look inside the nose) to be able to see.

If there is a deviated septum causing nasal obstruction, the only fix for this is surgery (“septoplasty”).  Oral medications and nasal sprays can help treat any nasal swelling and congestion but they have no effect on the underlying septal position.  Typically, septoplasty is performed once the patient’s nasal bones and cartilages are fully done growing (typically mid to late teens).

Afrin and occasionally cocaine (Yes, we are one of the few specialties that still use medical grade cocaine) is used on cotton balls to decongestant and anesthetize the inside of the nose.  Local anesthesia is then injected into the septal lining on both sides (SEE VIDEO)

2. Incision and elevation of septal flaps

Then, the mucosa (lining) of the nose is separated from the underlying cartilage and bone (SEE VIDEO)

In the schematic photo below, the black represents the septal cartilage/bone and then red lines represent the mucosa. This needs to be done in a meticulous fashion to prevent a postoperative perforation (hole) in the septum.  At this point, a cut is made vertically and horizontally in front of the deviated portion of cartilage and the lining on the other side of the septum is then elevated off of the cartilage and bone. 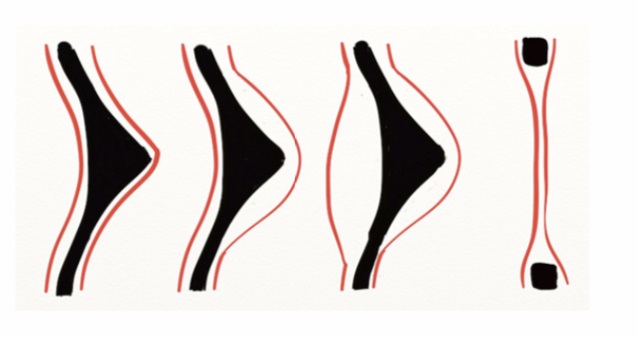 Once the flaps are elevated, the deviated portion of cartilage is separated from the bone behind it and removed (SEE VIDEO) 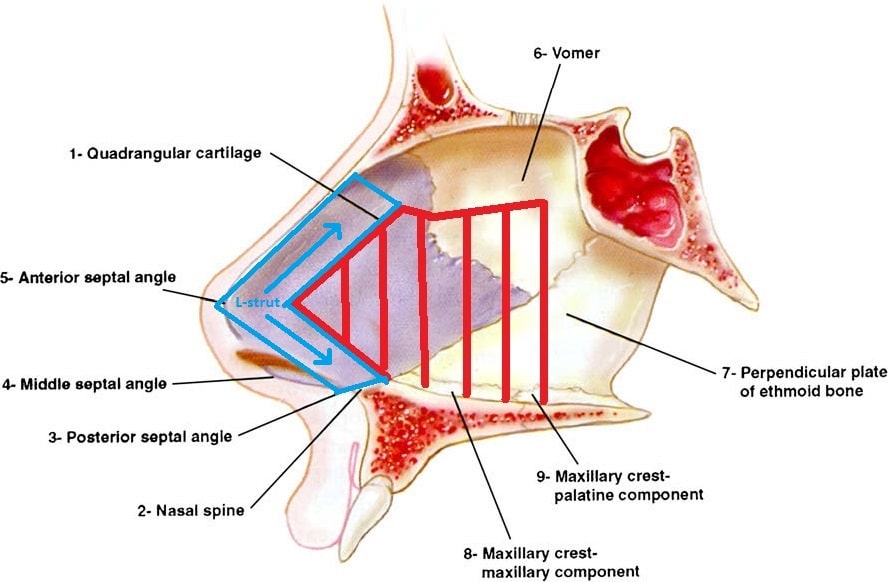 This is the cartilage that is responsible for the external shape of the nose and by leaving it undisturbed, a routine septoplasty typically does not result in any external changes.

At this point, cuts can be made above and below the deviated bone and the bone is removed with forceps (SEE VIDEO)

Once the deviated portion of septum is removed, the front incision is then closed with dissolvable stitches.  After this, a dissolvable stitch may be used inside the nose to bring the right and left mucosal flaps together to prevent a collection of blood within the septum (“septal hematoma”)

The below videos show how much more open the left side of the nose is after straightening the deviated septum.

Endoscopic view at the beginning of the case (YOU CAN SEE THE CAMERA CANNOT PASS THROUGH THE LEFT SIDE OF THE NOSE):

Endoscopic view at the end of the case (YOU CAN NOW SEE THE CAMERA EASILY PASS ALL THE WAY INTO THE BACK OF THE NOSE):

Since the surgery is done within the nose, there should be no external scars, external nasal swelling, or black eyes.  After surgery, there can be some tenderness.  This can be usually be managed with OTC Tylenol although the doctor may prescribe a pain reliever.  Also most patients will be stuffy and have some bloody drainage for at least the first few days.  Typically nasal “packing” is not used though some doctors will place soft silicone septal “splints” to help support the septum and compress the septal flaps against each other.  The nose is relatively stable by 3-6 months after surgery though some changes can rarely occur up to a year or more.

The above surgical description explains septoplasty for the straight forward deviated septum.  However, as I mentioned earlier, the septal deviation can be much more complicated and not fully amenable to the aforementioned procedure.  As you have seen, the prior surgery does not involve any manipulation or changes to the “L-strut.”

Here you can see photos showing a caudal septal deviation:

Here you can see a photo showing a dorsal septal deviation:

When this portion of the septum is crooked, it requires advanced maneuvers to straighten.  Many times these cases are done in conjunction with a rhinoplasty, which involves cosmetic changes to the nose.  At times, these can be performed through the standard septoplasty incision (inside nostril without any scars), but often requires an “open” approach whereby an incision is made on the columellar skin (bottom part of the nose).  This type of surgery is much more involved as it involves separating the skin and the external nasal cartilages from the septum.  This approach offers a wide visualization of the septum and allows full manipulation of the L-strut without any external forces acting on it. For these cases, various suture and/or splinting techniques (using pieces of cartilage or bone as a buttress to keep the septum straight) are typically performed.  Rarely a septum is so severely deviated that an extracorporeal septoplasty is necessary to get the septum straight.  In this advanced type of surgery, the entire septum is taken out of the nose, cut into pieces, sutured into a straight configuration, and then sutured back into the nose. As with all of these advanced septoplasty procedures, the recovery is quite different than the basic septoplasty surgery.