Chronic Cough
Chronic Cough is a cough lasting more than 2 months that does not resolve with rest or medication. A chronic cough usually has multiple causes. Treatment requires pharmacological intervention and behavioral management.

Chronic Cough is a common problem seen in the Voice and Swallowing Center. It is often treated without success as a sinus, allergy or lung problem or as a functional problem that people are told to "live with it." Chronic cough can be extremely debilitating. One of the most often overlooked causes of chronic cough is Paradoxical Vocal Fold Motion Disorder (PVFMD). PVFMD is known by many different names such as vocal fold dysfunction, vocal stridor, irritable larynx syndrome and adult onset asthma.

Patients with PVFMD complain of severe long-term cough, occasional changes in voice quality, increased breathing difficulty around soap powders, perfumes and other odors, shortness of breath or air hunger and even wheezing or other breathing noises associated with breathing. Despite the use of steroids, inhalers or other pharmacological agents, the cough and breathing difficulties persist in people with PVFMD.

AT the Voice and Swallowing Center, a standard series of tests are used to diagnose PVFMD. The first part of any examination is a thorough case history relating to the onset, severity and previous treatments of the problem. Next is a transnasal flexible video laryngoscopic examination of the larynx and vocal folds. In this exam, the patient is given specific vocal and breathing tasks to perform while the larynx and vocal folds and the entire exam is recorded on DVD in order to study the motions during each of the tasks. An experienced voice pathologist does a perceptual assessment of the voice during the visit. The video exam of the larynx is followed by a breathing test to identify the breathing components related to the lungs and the upper airway.

Treatment for PVFMD is comprehensive and carried out by an ear, nose and throat specialist and a voice therapist. PVFMD is often accompanied by laryngopharyngeal reflux (see web site), an inflammation of the larynx caused by stomach acid in the larynx. Proper medication is the first step in the treatment. This is followed by a series of breathing exercises known as respiratory retraining. Respiratory Retraining focuses on coordinating breathing with vocalization. This technique has been shown to be useful for patients with excessive cough, paradoxical vocal fold motion disorder, vocal spasm or laryngeal irritation. It is used in conjunction with the treatment of laryngopharyngeal reflux. The exercises consist of rhythmic breathing using minimal inhalation effort and working up to active exercises combining breathing and vocalization in specific rhythmic patterns. The origins of this program date back to studies of PVFMD at the National Jewish Hospital in Denver Colorado. (www.njh.org)

take as little as 3 weeks or as much as 6 months. The treatment is highly successful and results in a vastly improved quality of life for those who have suffered with cough. A report of this treatment was selected for presentation at the Eastern Sectional Meeting of the 2004 American Academy of Otolaryngology in New York City. 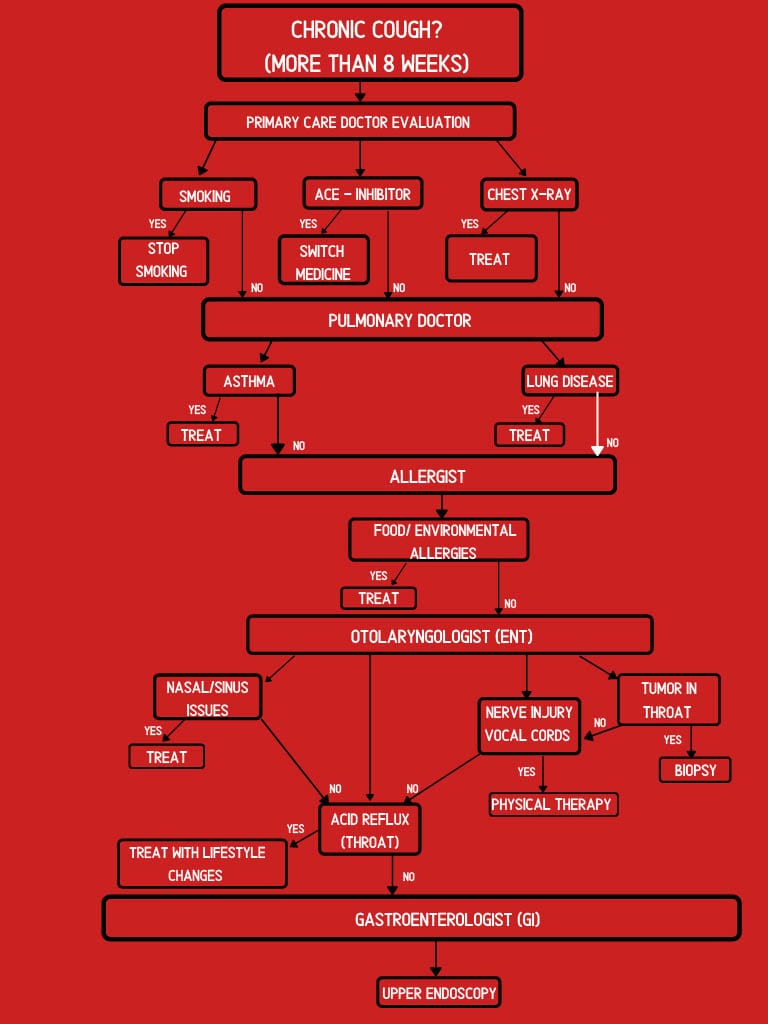