Ear Candling Is Taking Off On TikTok, But Is It Safe to Try at Home?

Ear Candling Is Taking Off On TikTok, But Is It Safe to Try at Home?

Find out why so many people have been placing lit candles in their ears, and whether ear candling is actually worth trying.

When you see it on the internet, ear candling appears to be soooo satisfying: You simply tilt your head to one side (or lie down), place a thin, cone-shaped candle into your ear, light it, and let it burn as low as possible. When you open up the remaining candle, it's miraculously filled with what seems to be all the junk that was hiding inside your ear. (Think: Like a blackhead strip, but for your ear wax.)

Because this process is so grossly satisfying to watch, of course it's ended up on TikTok. (Here's one example.) Users aim to go viral by showcasing the process, and then opening up the "ear wax candle" on camera to reveal the gooey, crusty remnants of whatever was "extracted" during the candling.

But are ear wax removal candles actually effective? And more importantly, is this is healthy, safe thing you should do to your ears to keep them clean? Here's everything you need to know about ear candling and whether or not you should try it for yourself. 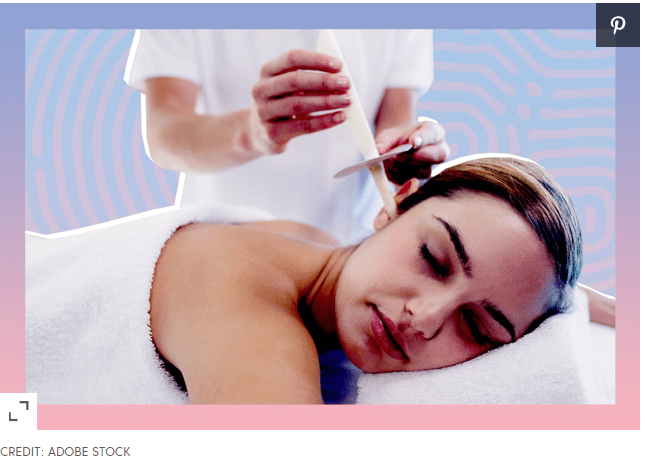 What's the Deal with Ear Candling?

The medical term for ear wax is cerumen, and its role is to protect your body against bacteria, viruses, and fungi coming in to threaten the ear canal, says Sayani Niyogi, D.O, an ears, nose, and throat (ENT) doctor with ENT and Allergy Associates, LLP.

"Most people's ears are 'self-cleaning' and naturally push out excess cerumen when it builds up," says Dr. Niyogi. "Contrary to popular belief, cerumen really only forms in the outer part of the ear canal, just past where our fingers can reach." (That's right — ear wax only hangs out in your outer ear canal and not deeper into your ear.)

But still, humans are curious, and ear wax can feel uncomfortable or even be embarrassing to deal with — and that's when ear candling comes into play. Some will hit up a day spa for an ear candling treatment, while others will take the DIY route as seen on TikTok by purchasing a few ear wax candles online.

"Ear candling has been touted for years as a method to remove cerumen," notes Dr. Niyogi. "In candling, hollow fabric cones are soaked in candle wax, placed in the ear canal, and lit on one end, with a paper plate positioned to catch the resulting ash. After 15 minutes, a brown substance is found in the cone, believed to be cerumen," she says.

So how does an ear candle supposedly remove ear wax? "One theory is that, as the candle burns, it creates a vacuum that extracts the cerumen from the ear," says Dr. Niyogi. "An alternate theory is that the heat of the candle melts the cerumen, which slowly comes out of the ear canal over the next one or two days."

It sounds simple enough, but may be too simple to be true. Not only does ear candling do little to nothing for your ear wax, but Dr. Niyogi says she's also seen patients come in who have tried candling at home and pushed their ear wax further into their ears, causing discomfort. (Related: Jessie J Says She Doesn't Want "Sympathy" for Her Ménière's Disease Diagnosis)

"Unfortunately, despite its claims, candling has been found to not only be ineffective but also dangerous," says Dr. Niyogi. "Studies have shown that the 'vacuum' effect is not strong enough to pull the cerumen out, nor is the heat sufficient to melt it. One examination of the brown substance left in the cone revealed that candle wax, not cerumen, is what accumulated in the fabric." (Related: Is Your Fitness Class Music Messing with Your Hearing?)

She says it's common to hear of patients coming into ENT offices who have tried candling and show up with "deeper blockages of cerumen, burns to the face and ear canal, and most dangerously, damage to the eardrum from hot candle wax, resulting in temporary or permanent hearing loss."

Plus, the U.S. Food and Drug Administration (FDA) has issued its stance on ear candling: don't do it, adds Dr. Niyogi. The FDA warns it can cause serious injuries, even when followed according to packaging instructions.

How Should You Remove Ear Wax, Then?

Now that you're up to date on ear wax candles, you might be wondering what other route you can safely take to clean out your ear wax. It turns out, when you reach for a Q-Tip or cotton swab and dive into your ear opening, you do little to "tidy up" your wax buildup, and can even cause harm, says Dr. Niyogi. "Putting things like cotton swabs or bobby pins in the ears interferes with the natural process and can push the cerumen deeper, scrape the ear canal and lead to painful infections, or even cause damage to the eardrum or middle ear," she says. "In the best case scenario, overuse of cotton swabs can create a vicious cycle of dry and itchy ear canals."

If you feel like you need to clear away some excess ear wax from the outside of your ear canal, Dr. Niyogi suggests cleaning the outside of the ear off with a soft washcloth after a warm shower. "For a small minority of people, cerumen can accumulate more frequently," she says. "There are over the counter ear drops available (such as Debrox) which can be used to soften the cerumen so it comes out on its own, though this is more effective for moderate amounts of cerumen." If you suspect you're having an issue with your ears or something feels off, it's best to visit a doctor to see what they suggest before trying things out on your own at home. (Related: Asking for a Friend: How Do I Remove Ear Wax?)

"The moral of the story," says Dr. Niyogi, is to "get rid of the cotton buds and ear candles, and let your body do what it does best." Any other issues should be handled directly by your doctor.